Morbid with a Mission 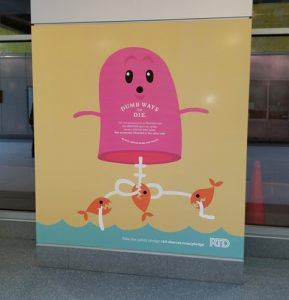 If you have traveled on RTD in recent months, you may have seen their adorable jelly bean faces (and if you’re hip to viral video trends, they might even look familiar). They’re often smiling, despite the fact that each of them is meeting a unique gruesome demise.

These cuddly and not-so-bright characters are part of a mass-transit public safety campaign, captivatingly titled “Dumb Ways to Die.” The campaign originated in Melbourne, Austrailia in 2012 as an animated music video and soon became a worldwide viral hit and Cannes award-winner.

From the website of McCann Melbourne, the advertising agency that created the spot:

“The video has now amassed close to 100 million views and 4.8 million shares. In February 2015, Dumb Ways to Die is still the third most shared ad of all time. Supported by an integrated advertising campaign, it spawned a plethora of global parodies and spin-offs with over 35 million combined views, attracting massive global media attention for its safety message.” 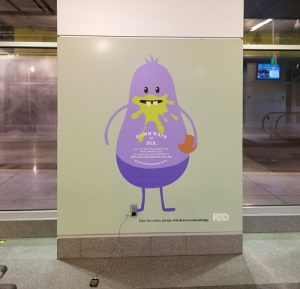 Dumb Ways to Die was brought to America – in an official capacity – by Denver’s RTD transit system in January of 2016. Shortly thereafter, RTD chose Denver Print Company to print their vinyl graphics and vehicle wraps. Most of the work we have done for them since that time has involved these amiable, not-long-for-this-world, little jelly beans.

As RTD is still the only major American transit system using the Dumb Ways to Die campaign, one could say that Denver Print is the unofficial official Dumb Ways to Die printer of the United States.

Unsurprisingly, this campaign has not gone without controversy. Some have argued that it encourages people to do the things portrayed and that, specifically, it reinforces death-by-train as a suicide method. McCann Melbourne counters this by claiming that “the campaign contributed to a more than 30% reduction in ‘near-miss’ accidents, from November 2011 to January 2013.”

No matter where one may fall on the actual effectiveness of the campaign from a safety standpoint, it is hard to deny that it is morbidly charming. And, truly, the printed versions don’t do it justice. For the full effect, one must watch the video and experience the ear worm that is the Dumb Ways to Die song. (Be warned, you will be humming it for the rest of the day once you listen.) Enjoy!

If you can’t get enough of these little guys, the Dumb Ways to Die game is available now on iPhone and Android. … Of course.

Morbid with a Mission

by Peter Higgins, Marketing Coordinator & Web Manager If you have traveled on RTD in recent months, you may have seen their adorable jelly bean faces […]
Do you like it?1
Read more