In the spirit of the season, a few Denver Print Company graphic designers sat down to discuss and critique some designs from past presidential campaigns. Just as with any design project, the quality of the graphic design will not make or break a presidential campaign, but it can certainly either help or hurt. Good design projects confidence, while bad design can make a candidate look unprepared and unprofessional.

Design tastes and standards have changed over the years, of course. What was top notch in 1960, might look ridiculous today. Just as interesting as the design choices here, is the evolution the of design trends.

Without further ado, let’s take a critical look back in time with the DPC design team… 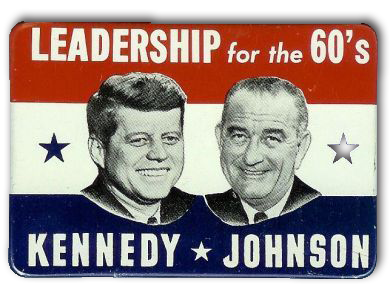 In the information age, photos of candidates on campaign buttons, posters, and yard signs seems like an antiquated idea. We all know what they look like. In 1960, before every house had a TV, images of the candidates were an important part of every campaign’s message.

“I love those ‘60s typefaces,” says our Graphic Design supervisor, Eric Schelein. “If it was me, I’d have spaced the faces out a little bit, but it’s not too obtrusive.”

Peter Higgins (Webmaster & Marketing): “This is strong. It almost looks modern, except for the black and white photo. I know it wasn’t intentional at the time, of course, but I like the juxtaposition of the old and modern-ish.”

Eric: “I like the LBJ/USA elements on the right side. Strong, forceful, directional. But LBJ’s face on the left: TOO CLOSE.”

Peter: “Yeah. It looks like he’s creepily peeking around a corner. ‘Hey there!’”

Kala Jenkins (Project Manager, Signs Dept.): “Seriously, though, don’t do it. It hurts.”

Peter: “Sure the blue on red is bad, but how do we feel about the triple-H logo?”

Peter: “Really? It stands out, I guess, but I just think it looks like an odd ladder. And it brings up too many questions. Like, does his middle name start with an ‘H’ too?” 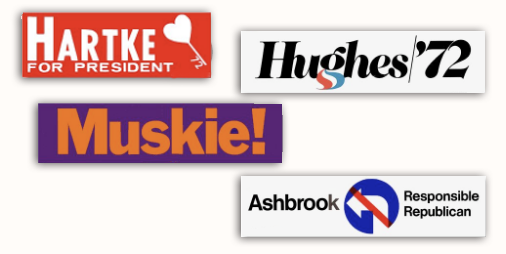 Corinne: “The old typefaces used make this collection look as old as it is. Helvetica looks nice, it always does, but this was all very overused when this was designed.”

Peter: “An exclamation point is always an odd choice (Jeb!). And purple and orange? I get the impression that Muskie!’s heart wasn’t really in it. The Hughes one makes me think Aquafresh.”

Eric: “Ashbrook’s sticker is nice. I like the little graphic and the Helvetica fairly screams 1970s, almost as much as the typeface on Hughes’ sticker. The other two, meh. The heart/key pun is kind of cute, but not exactly “presidential” (although that might have played better in the early seventies).”

Kala: “Is this a gas station or a president ad?”

Peter: “Jackson for President … of Romania. I like this design quite a bit, actually, it just doesn’t look very ‘presidential’. It’s more Reading Rainbow. Though, I guess we can’t complain about the overuse of red and blue and then also criticize the designs that use other colors for not looking presidential. The conundrum of campaign design.” 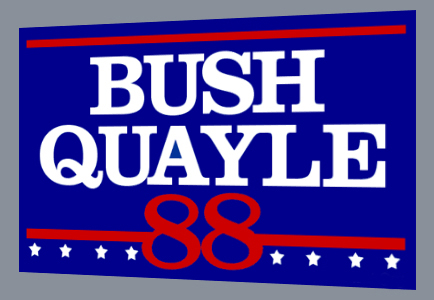 Eric: “My favorite part of this is how the red line on the bottom reacts with the 88. The font is nice. Powerful and strong. The red and blue together make my eyes hurt, though.”

Corinne: “Nope, Nope, Nope….. This does not work even slightly. Mixing fonts like this is a bad idea. There is no hierarchy in this composition. My eyes don’t know where to look.”

Eric: “Awful font selection. Three different fonts with three different weights. ‘We the People’ is hard to read and gets lost next to the thickness of the word ‘BROWN’.”

Eric: “Reminds me of a sticker I had on my car during that election. ‘Picard/Riker ‘96’.”

Corinne: “This to me looks American. I do not love the American flag graphic, but it does its job.”

Peter: “I agree. If you’re gonna go American, go AMERICAN. I always sorta liked the Bush/Cheney design aesthetic, in a vacuum. It’s strong, powerful … and scary, in a Darth Vader sort of way.” 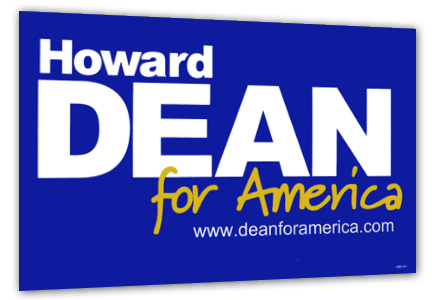 Corinne: “Right. And the colors do not scream USA. I see Swiss flag immediately. Needed a graphic or something that would make it look American.” 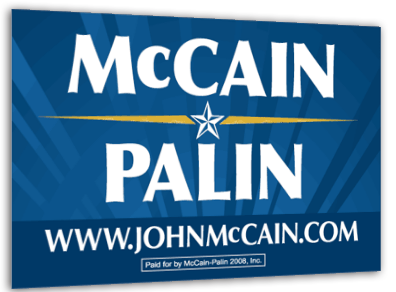 Peter: “Is this the first year that campaigns started hiring graphic designers? Obama v McCain is the historical high-water mark of campaign design, for sure.”

Eric: “I dig the ‘spotlight’ effect in the background, and the yellow elements in the middle of the sign really stand out against all the blue. Good font choices.”

Kala: “I’m not 100% sold on the typeface and that particular barn star plays towards southern ideals. Maybe that was his market. Colors and hierarchy work well here.” 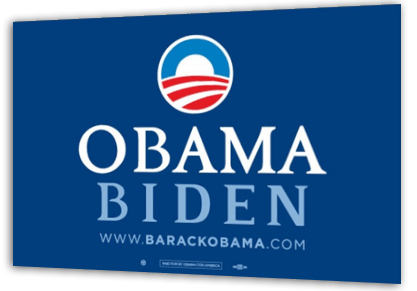 Eric: “What is it with plain blue backgrounds? Why not add a texture? A graphic? The red draws your eye directly to the logo, and the white in the logo connects well with Obama’s name.”

Kala: “Simple, Modern, Free of distractions. As I lean towards simplistic ideals, I find this desirable. However, appears to be a refinement of the McCain ad.”

by Peter Higgins, Marketing Coordinator & Web Manager In the spirit of the season, a few Denver Print Company graphic designers sat down to discuss and […]
Do you like it?0
Read more