Custom step and repeat backdrop banners are great as red carpet backdrops, award ceremony backdrops, event banners, and convention photo drops. The amount of space they take up makes them ideal as photo backdrops and convention booth set-ups. Event sponsors love the brand exposure, especially when photos of the event guests are tagged on social media sites and shared amongst social-media friends.

Sometimes you have to see something many times before you realize that you have seen it. This is often the case with step and repeat banners. You may not be familiar with this term, but if you have been anywhere near a TV, magazine, or the internet in the last 20 years, you have certainly laid eyes on these ubiquitous center-pieces of subliminal advertising.

It’s a simple concept, really: Turn the background of a celebrity photo into advertising space. In a way, it’s surprising that it took us until the late 20th century to come up with it. It’s not surprising at all, however, that the idea has exploded in the age of information and social media. 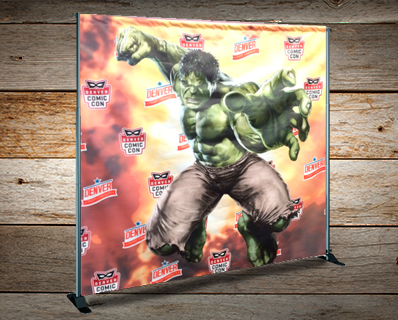 The product itself is also quite simple. A step and repeat banner is just a backdrop with a repeated pattern of company logos. It may be just one company logo, or it may be a few, but the repetition is key. Step and repeat banners are specifically designed as a backdrop for photographs and video. The repetition allows the logos to be visible behind the subject regardless of where they stand or from what angle the camera is pointing. A layout of larger single logos would not work as well for this because the subject would have to stand in the perfect spot, and the photo or video would have to be taken from the correct angle, in order for the logo or logos to be fully visible. With a correctly designed step and repeat banner, the subject can pose, and the camera person can aim, as they please and all of the logos will be captured in the background.

The layout of the logos is a key factor as well. On a step and repeat with multiple logos, the spacing and the alternating of the logos from the top to the bottom of the banner are critical. If the logos are placed too close together, they may become harder to read. If they are too far apart, it becomes more likely that certain logos will get cropped out of a photo. If logos are not alternated correctly, this can lead to the exclusion of certain logos from the final images as well. Companies are often paying to have their logo on a step and repeat banner, so a poorly designed step and repeat banner can lead to some angry sponsors.

Custom step and repeat banners can be a bit of a challenge to have printed by just any print shop. The size and accuracy required to print them makes them a specialty product.

A Brief History of Step and Repeat Banners

Step and repeat banners came from the world of fashion. They first started appearing in the 1980’s along red-carpet entrances to high-end fashion events. From there they were quickly added to the red-carpet repertoire of the Academy Awards and various other music and award events.

If you Google-image-search “red-carpet 1970’s”, there is nary a banner to be found. For that matter, it is hard to even find many posed red carpet from that era. The majority of the photos are candid shots of the celebrities just walking into the event. In the background are flowers, hedges, curtains, and other such mundane things. Great effort was likely put into creating these nice-looking, and non-distracting backdrops. The celebrities themselves were the focus, there was no reason to distract from that.

At some point, likely as celebrity-worship culture grew in the 1980’s, stopping to pose for photos on the red-carpet became a thing. As this happened, event organizers quickly started to realize that, in the photo of a celebrity, the background was potentially golden advertising space. It began with step and repeat banners with just the event logo. “American Music Awards”, for example. As organizers realized that they could actually sell this advertising space, step and repeats gradually evolved into the event sponsor-oriented banners that we see most often today.

Still, before the internet and 24-hour news channels, step and repeat banners were something reserved for the fashion world and big-time TV events. Even in this archaic time, the allure of celebrities, all gathered in one spot and walking the red carpet in designer gowns, dresses, and tuxedos that the average person could only dream of being able to afford, carried huge appeal. Hashtags, viral media, and TMZ didn’t exist yet, but Entertainment Weekly was on every Saturday and there was a People magazine in every grocery store checkout aisle.

And then the world changed. The advent of the internet and social media turned the effectiveness of step and repeat banners up to eleven. Simply put, there were now more celebrity photos in more places and they were accessible at the click of a button. And every one of these photos from an organized event spelled opportunity: Opportunity for brands to get exposure in the same frame as a popular celebrity and opportunity for the event organizers to sell advertising and sponsorships on their step and repeat banners. 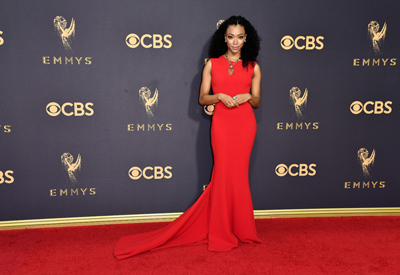 Why Step and Repeat Banners Work

Just like with real estate, the name of the game with step and repeat banners is “location, location, location.” And that location, namely, is next to your favorite celebrity’s smiling face. Many brands, understandably, view this as a win. Every viral celebrity photo in front of a step and repeat banner with their logo on it is almost as good as a paid endorsement, but it comes at a fraction of the cost it would take get said celebrities to actually endorse their product.

In recent years the pendulum has begun to swing back in the other direction in regards to the amount of advertising on step and repeat banners. The Academy Awards, for example, have eschewed sponsored advertising on their red carpet banners in recent years, in favor of just displaying their own logo. The thinking is that it is more important to enhance one’s own brand than to earn a few advertising dollars on the side. Also, the more sponsors that appear on a step and repeat banner, the more an event begins to look like a NASCAR race. This waters down the “high society” mystique that makes such events so appealing to begin with. In general, event organizers must strike a careful balance for their red carpet displays: Advertise, but keep it classy. If done correctly, a step and repeat banner can achieve this balance perfectly.

Therein lies the subtle genius of step and repeat banners from an advertising perspective. Though the messages are not technically subliminal, what’s standing in front of the banner (usually a gorgeous celebrity) is so eye-catching and distracting that the end result becomes nearly subliminal.

Imagine looking at a photo of your favorite celebrity in a killer outfit at a red-carpet event. If someone asked you ten minutes later what logos were on the step and repeat banner behind the celebrity, would you be able to answer? Probably not. But you did see the logos. They were right there next to the celebrity who was giving you warm fuzzy feelings.

This type of quasi-subliminal advertising can be highly effective, psychologists say, because it catches you with your guard down. From psychologistworld.com:

“Subliminal messages might gain their potential influence/power from the fact that they may be able to circumvent the critical functions of the conscious mind, and it has often been argued that subliminal suggestions are therefore potentially more powerful than ordinary suggestions. This route to influence or persuasion would be akin to auto-suggestion or hypnosis wherein the subject is encouraged to be (or somehow induced to be) relaxed so that suggestions are directed to deeper (more gullible) parts of the mind; some observers have argued that the unconscious mind is incapable of critical refusal of hypnotic or subliminal suggestions.”

High-end step and repeats are made from fabric stretched over a rigid frame. These sometimes go by alternate names, such as “hop-up banners” or “trade-show backdrops”, but if it follows the repeated-logo theme, it is essentially a step and repeat banner.

The more typical step and repeats are vinyl banners suspended on an adjustable frame. There are instances where vinyl can be a little trickier to deal with, as it has more of a tendency to give off glare when faced with a camera flash. This can be easily avoided, however, if the camera person shoots from a slight angle, rather than straight on. If photos are taken correctly, the colors on a vinyl step and repeat banner will actually “pop” more than those on a fabric banner.

Where does the name “step and repeat” come from?

There are two schools of thought on where the term “step and repeat” comes from. There is obviously the repetition of the logo. This seems to be the most obvious explanation. As two logos are alternated horizontally and vertically across a step and repeat banner, the resulting effect on the like logos appear in a diagonal line across the banner. In other words, here’s the logo. Step down and over, repeat the logo. Step and repeat.

The name could also refer to, of course, the actions performed around a step and repeat banner. A celebrity steps in front of banner, pictures are taken, repeat. It’s hard to find a consensus on the internet of where the name truly came from, so feel free to draw your own conclusions. 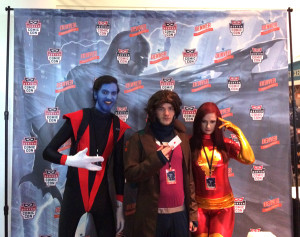 These banners are so large that hanging them properly can be a small challenge, especially if the set-up is outside.  We carry some of the best banner  stands that the industry has to offer. Step and repeat banner stands have retractable polls and come with a carrying case for easy travel and storage. Our banner experts would be more than happy to show you the variety of banner stands available.

*Price-matching applies to banner printing only, not banner stands.

We offer Rush printing on all step and repeat banners. Vinyl stock may vary so please call ahead.

Who uses step and repeats?

CAN'T FIND WHAT YOU'RE LOOKING FOR?