As usual, there were a lot of superb costumes at Denver Comic Con this year. Denver Print Company captured many of these costumes in our specially-designed action figure photo booth, the gist of which is this:

The subject steps inside our acrylic box and we photograph them from the front. With the proper cropping, BLAM! They’re in action figure package!

We’ve been doing this for a few years, not only at the Denver and Rocky Mountain Comic Cons, but also at the Rockies, Avalanche, and Rapids’ Star Wars Nights. It’s always a very popular attraction, and those dressed in costumes are always among the most eager to jump in the booth.

For Denver Comic Con 2016, we originally had planned to do a “Top 10 Comic-Con Costumes” blog post. However, due to the enormous amount of photos taken and near-impossibility of ranking the best costumes against one another, we decided to just pick a few stand-outs and discuss them. So here they are, the noteworthy Comic Con Costumes from DCC 2016. 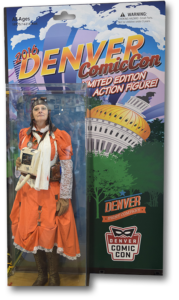 It’s sort of hard to get all the details on this picture, but this person really put a lot of effort into her costume! The leather flying cap, the goggles, the vintage boots and gloves, all work really well with the theme. But the kicker is the chest-plate. Again, it’s hard to see, but there are a bunch of cool looking clockwork parts in there, and what looks like a pressure gauge sticking out of the top. Another neat touch (that you sort of can’t see); her scarf has the Rebel Alliance emblem printed on it. 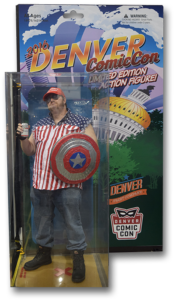 The twist-on-a-classic costumes, like this gem, are some of the best. Notice the can of Budweiser and the “Make America Great Again” hat. This guy is giving us the real-deal Captain America, not no fancy-pants superhero! 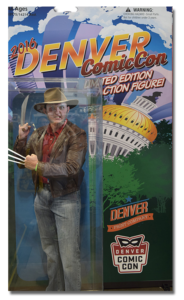 Some outfits are a bit more confusing. If not for the Wolverine claws, we would have pegged this costume as Indiana Jones. Let’s just give the guy the benefit of the doubt and assume that it’s a mash-up. 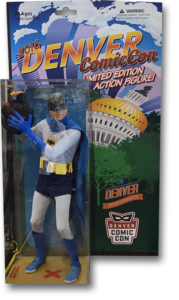 Batman with a Bomb

If you haven’t seen the classic scene from the campy 1966 Batman and Robin movie in which Batman runs around a crowded boardwalk trying to dispose of a bomb, only to be thwarted by nuns, babies, ducklings, and a marching band, go check it out. Then come back and see how this guy nailed the costume. (We think this might actually be Adam West.) 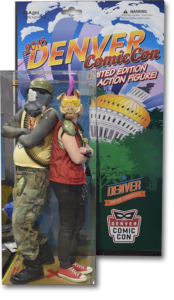 For obvious reasons, these are hard costumes. These folks pulled them off perfectly, though! Well done. 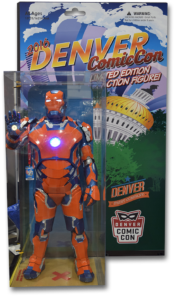 The fact that this is a Broncos version of Iron man is just icing on the cake. Orange and blue or not, this is an amazing Iron Man costume. Let’s hope this guy has Broncos season tickets. He could give Orange Vader a run for his money. 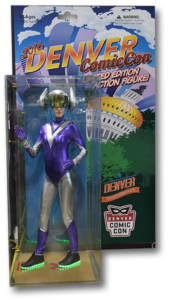 It’s all in the shoes

We’re not quite sure what’s going on here …. But those are some sweet light-up shoes!! 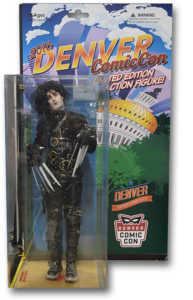 If you’re gonna buy knives for your hands, why be just another Wolverine, when you can be a spot-on-perfect Edward Scissorhands? Careful planning and masterful craftsmanship went into this costume. (Shortly after this picture taken, he carved some ice sculptures and made it snow in the exhibit hall.) 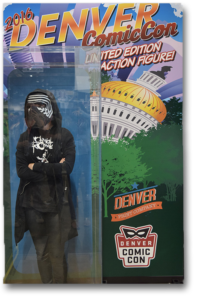 It can be reasonably assumed that Ben Solo went through some rough and rebellious teenage years, right? Well here’s the proof, complete with skinny jeans and a My Chemical Romance t-shirt. The idea is slightly better than the execution here … but it’s a GREAT idea. Good job. 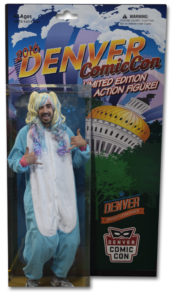 This guy looks like he’d be a blast to hang out with. That is all. 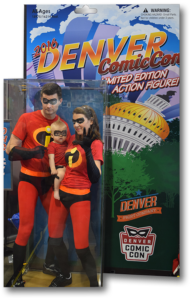 OMG! Look at this family! The only person who isn’t aware that this is totes adorbs is in the picture! 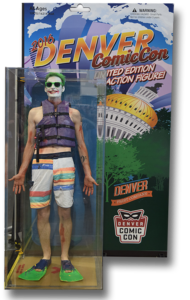 The Joker on Vacation

Even the baddest baddies need to take a break sometimes. And that life jacket … we never thought that The Joker would be big on nautical safety, but hey. Good on ‘ya, mate! 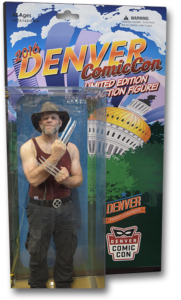 This gentleman makes a better Wolverine than Hugh Jackman. It’s a simple costume, but he looks like he walked right off of the comic book page. 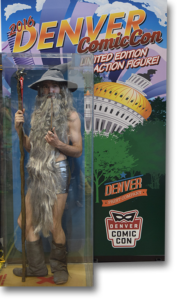 Y’know, it was 97 degrees in Denver on Comic Con Saturday. Can you really blame Gandalf for dressing like this?

This right here is the meeting point of “cute” and “scary.”  We were sure this little sweetheart was going to turn her head around 360 degrees at any moment. 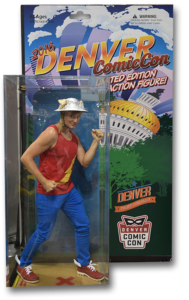 What this classic outfit lacked in aerodynamics, it made up for in style. (The Flash’s time-traveling abilities are on display here, as this 1950’s incarnation of the superhero clearly has a cell phone in his pocket.) 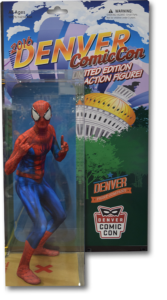 Not much insight here … except that this is a darn good Spiderman! Most folks end up looking silly in authentically rendered Spidey suit. Not this dude. 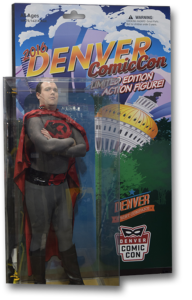 The Superman: Red Son storyline explores what would have happened if baby Kal-El had landed in the Soviet Union instead of Kansas. You’ll have to read the comic to find out what circuitous path led him to Denver Comic Con 2016! 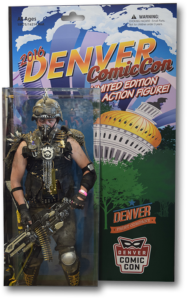 This outfit is definitely not MEDIOCRE! This wasteland wanderer obviously put a ton of work into this ensemble. Chains, sparkplugs, re-purposed football pads, spent bullet casings, a dusty helmet and a mean looking machine gun prove this guy’s ready to ride eternal and chrome into the halls of Valhalla! 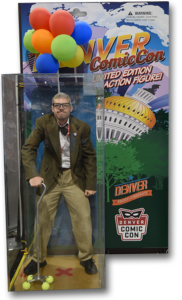 In a room full of superheroes, soldiers, and fighter pilots, going as Carl Fredricksen from Up is a delightfully out-of-left-field choice. The balloons make the costume work, of course. Without the balloons, he’s just an old guy. 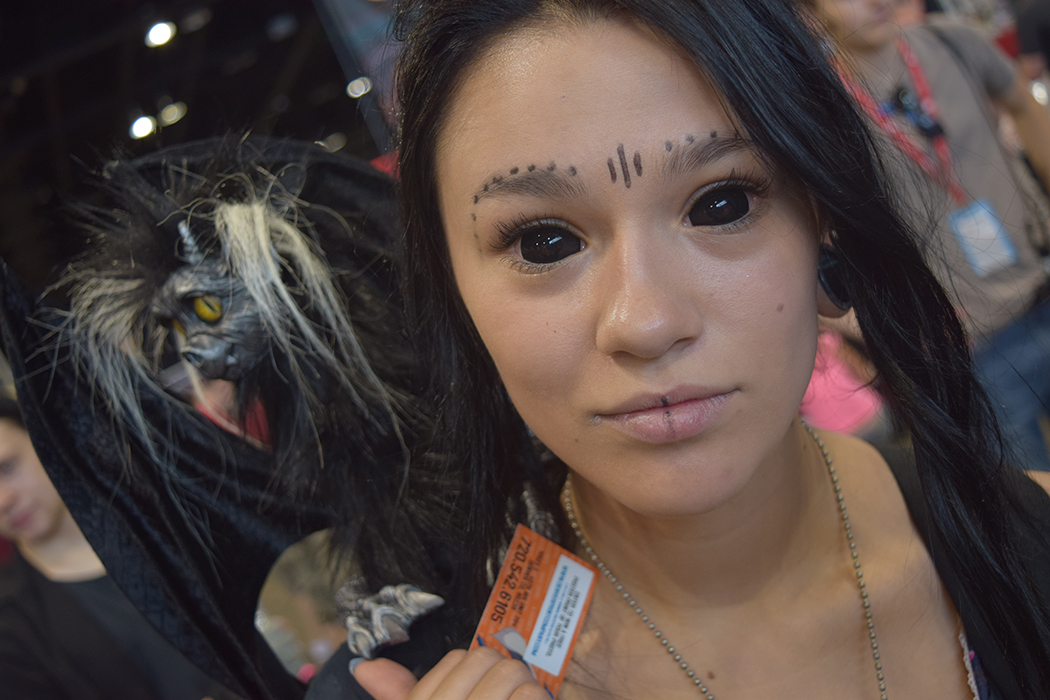 by Peter Higgins & Eric Schlelein As usual, there were a lot of superb costumes at Denver Comic Con this year. Denver Print Company captured many of […]
Do you like it?0
Read more