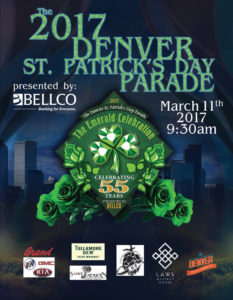 This year marks the 55th anniversary of the Denver St. Patrick’s Day Parade. Some say that the parade, held Saturday the 11th in downtown Denver, is the largest non-sports-related gathering of Colorado residents every year in one place. If you head down to to the event this weekend, make sure to pick-up a copy of the official parade magazine, which was designed this year by Denver Print Company’s own designer, Corinne Idler.

Corinne did a fantastic job on the project, making us doubly proud to be playing a part in this Denver institution. Click the images in this article for a closer look at some of her work.

The original Denver St. Patrick’s Day Parade, which is not associated with the current version, ran from 1889 to 1921. The original parade was kicked off with a Grand Ball the night before at the Chamber of Commerce. The combination of the parade and the ball were the largest social events of the City of Denver and surrounding regions. It was canceled for economic reasons, however, in 1921.

The current incarnation of the parade began in 1962. There are two competing stories as to the inspiration for the current parade (both involving drunken tavern-goers marching around the block with flags after a night of revelry), but all agree that is was the visit of the Lord Mayor of Dublin, Robert Briscoe, in 1962 that really got things rolling. His visit near St. Patrick’s Day, and his motorcade from Stapleton Airport to downtown Denver, got people thinking about officially restarting the St. Patrick’s Day Parade in 1963. And that’s what happened.

“In the first official parade, Miss Evelyn Maher was our first Queen.  From 1963 to 1965 the Parade crowned their own Queen, titled “Queen of the Emerald Isle”. The coronation ball was one of Denver’s largest social events.  In 1965 the Parade Committee changed the name of the Queen to “Queen Colleen”. Many bands participated in 1963 including the Gold Sash Band, Highlanders Boys’ Bands, Centennial Grenadiers, the American Legion Post 1 and bands from all divisions of the armed forces. 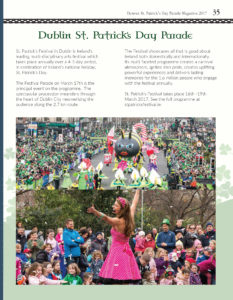 “While our official origins start in 1962, in 1963 the founders applied for a permit for an official parade on 17 March—with official parade entries and actual advertisement of the parade.  There were about 5,000 people on hand to watch the parade, in what was described as one of the worst windstorms in years. There were over 70 marching units this first year and invitations to the parade went out to the mayors of 53 towns and cities in Colorado. The high winds caused the parade to be cut in half, marking only 12 blocks vice the planned 24.  The winds were so bad that many store front windows were broken out causing the parade route to move from 16th street to a route that lead from 15th St. to Tremont Pl, across to 17th St. to Lincoln St. and then south on 14th St. where the parade ended.  The parade lasted an hour and Jim Eakins the first Parade Chairman said “Everyone was pleased, It was an unqualified success. We’ll be back next year.”  One of the most impressive entries was the Denver Police Department’s K-9 Corps.  The Festivities concluded with a gala at St. Patrick’s Day Charity Ball held at the Cosmopolitan Hotel.” 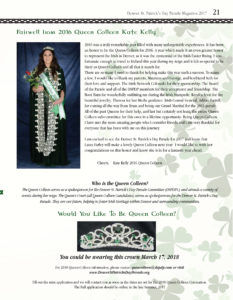 For more details and history on the parade, please visit the official website:  www.denverstpatricksdayparade.com 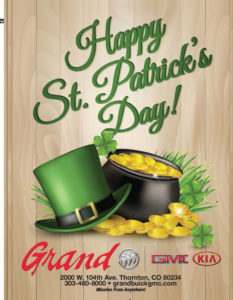 by Peter Higgins, Marketing Coordinator & Web Manager This year marks the 55th anniversary of the Denver St. Patrick’s Day Parade. Some say that the parade, […]
Do you like it?0
Read more